In the summer of last year, Dresden Zoo began construction on the largest building project in the zoo’s 160-year history – the new orangutan house. This building will also be home to other animals from Southeast Asia, in addition to the friendly apes. The new orangutan house is designed to create a place in the zoo that showcases a cross-section of the diverse life found in the tropical rainforest while also focusing on nature and species conservation, sustainability and animal accommodation. The building combines modern architecture with animal-friendly enclosures designed to provide as natural a habitat as possible.

The high level of donations at present demonstrates that Dresden Zoo isn’t alone in its passion for the project; it’s also very important to many residents of Dresden. More than 1.5 million euros has already been collected – an impressive sum, as Dresden’s Mayor Dirk Hilbert also noted at today’s topping-out ceremony, which was attended by around 150 guests. He sees this as a sign of “the strong connection citizens feel with their animals in their zoo.”

According to Hilbert, the zoo is a “landmark and treasured favourite for Dresden, like the Zwinger palace complex, the Elbe River or the Striezelmarkt at Christmas. By deciding to support the financing plan, the city councillors have made a clear commitment to the zoo and the new orangutan house, showing that the city of Dresden stands by its zoo.”

Zoo Director Karl-Heinz Ukena warmly thanked the Mayor for making this clear statement and emphasised that, for him personally, the new building also represented a real milestone on the path to tangible nature and species conservation. “Our aim is to stay on schedule,” Ukena says. Despite difficult conditions, he remains optimistic that the house will be ready to open to visitors in November 2023. According to Ukena, the current overall economic and social situation is leading to dynamic changes in costs. The planned costs for the orangutan house amount to 20 million euros. However, the organisers are eager to spare no expense on the building project itself. “Of course we are considering where meaningful savings can be made. But we have already set out efficient plans for the building project, and we won’t be cutting costs to the detriment of the animals or the companies involved in the building work,” Ukena added.

However, Jens Krauße of the heinlewischer architecture firm put the 17 per cent increase in costs into perspective, noting that this fell within the scope of the current statistical price increase of 20 per cent. “Since March 2022, there have been dramatic increases in the prices of the contracts awarded in certain trades due to the war in Ukraine and the associated increases in prices for energy and raw materials,” Krauße continued. He then went on to focus on the special features of the new building. The outdoor enclosures, which are located within the structure and surrounded by the walls, are a key characteristic of the circular building. Special attention was also paid to the vertical design of the enclosures, which will give the orangutans significantly more space to climb in the future.

The Chair of the zoo’s Supervisory Board, Detlef Sittel, also thanked all those involved in the building project and stressed how important it is in these current times to push forward with hopeful projects like this one and bring them to the finishing stretch.

Ralf Leidel, President of ZOOFREUNDE DRESDEN e.V. friends’ association, thanked all the supporters and members of the association who have provided the project with funding totalling 650,000 euros. Just under half of this sum had already been collected for a winter home for the Aldabra giant tortoises. Since the originally intended location proved to be disadvantageous for the ongoing development of the zoo, the planned new building was integrated into the further planning considerations for the orangutan house. The giant tortoises, affectionately called ‘Hugos’ by the people of Dresden, will thus now be the second large animal species housed in the orangutan house and will be given a spacious enclosure here. These visitor favourites can then be seen all year round as well.

The topping-out ceremony now marks the start of the final building phase for the project. After the final roof sealing work has been completed, the building services engineers will begin to install plumbing, ventilation and electrical fixtures. The interior plaster is being applied, and the first windows will be installed before the end of the year. Following completion of the discovery trail – a winding visitor path that runs through the new building – five pylons will be erected in the first quarter of next year, from which the net structures spanning the orangutans’ outdoor enclosures will be suspended. 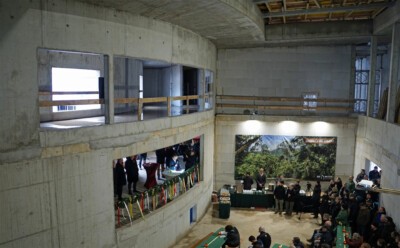 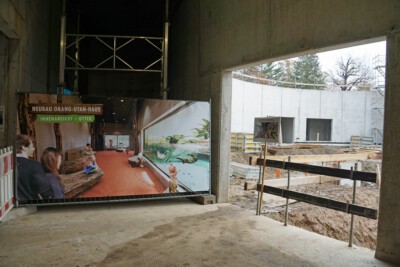