Last summer, we started work on our biggest project to date ‒ the new Orangutan House. Despite one or two complications such as the Covid-19 pandemic, we have largely been able to keep to our schedule and many of the construction phases have now been successfully completed. Between July 2021 and November 2021, the construction site was cleared and the utility supply lines were relocated. Excavations began in November, starting with a survey of the site for explosive ordnance. This stage took up a lot of time, and lasted until February 2022. In March of this year, structural work began on the basement; it is now forging ahead on the ground and upper floors.

The shell should be complete by October 2022, and work will then begin on the walls of the outdoor areas. At the same time, the netting for the orangutans’ outdoor enclosure will be installed. Starting in late October, the roof will be sealed and the foil roofs installed. Completion is currently scheduled for October 2023.

“We are making every effort to stay on schedule,” says zoo director Karl-Heinz Ukena. However, he cannot give an absolute guarantee that the project will be completed on time: “Circumstances are changing too quickly at the moment for me to be able to do that.” Costs are difficult to pin down at present. Compared with the costs set out in the original budget, construction costs have increased by about 20 per cent. “The price increases we saw to the end of February 2022 were due mainly to the pandemic, and were somewhat below average. Since March 2022, however, the war in Ukraine and the resulting increases in energy and raw materials costs have led to huge price increases in the contracts for the façade, steel construction and roof sealing, among other things,” explains Jens Krauße of the architecture firm heinlewischer. Costs are therefore currently running at around 2.3 million Euros over budget. Total additional costs are expected to come to approx. 3 million Euros. As a result, total construction costs are now 20 million Euros. “Even taking into account all the additional costs, this would be a cost increase of 17 per cent, which is actually below the producer price increase of 20 per cent,” Jens Krauße continues.

“But we are pushing forward with the project despite the higher costs,” confirms Karl-Heinz Ukena. The additional costs will be met from the zoo’s own funds. “We had been planning to use this money for other projects, such as renovating the petting zoo,” Ukena says. These projects will have to be postponed for the time being, although the zoo director is still holding out hope: “People have been incredibly willing to donate to the orangutan house. Total donations are currently standing at 1.47 million Euros. The more donations we receive for the project, the less we have to draw on our own funds. And this in turn makes room for other important projects.”

It is not possible to make any savings on the building project itself. “Of course we are considering if meaningful savings can be made. However, the construction project was meticulously planned, and we will not cut spending at the expense of the animals or the companies involved with the construction,” explains Karl-Heinz Ukena. Almost 90 percent of the companies concerned are based in Saxony. 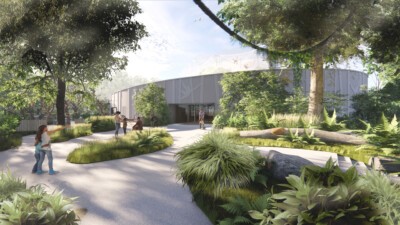 No major cuts are planned with regard to the layout, either. In this respect, we have come a long way. “Our theoretical ideas regarding the design of the building are slowly becoming a reality,” says Ukena. The façade has been redesigned. Instead of the outline of a rainforest, zoo visitors will see large orangutans clambering between tree trunks on the building’s exterior. Trees are being used as a design feature and a unifying motif for all the species in the enclosure; they will also play an essential role in the design of the interior. The paths, for instance, are indicated by tree trunks. This is intended to give visitors the impression that they are watching on silently from the darkened undergrowth, looking at the animals in their bright clearings. The effect is reinforced by dark colours, and plants and surfaces in various shades of green, evoking a forest. Large skylights will give the orangutan enclosure a friendly and bright feel.

Anyone interested in the project will have the opportunity to find out about it in detail on 19 August from 10:00 a.m. to 5:00 p.m. 19 August is World Orangutan Day, which Dresden Zoo will also be celebrating. Scouts and animal keepers will be stationed on the lawn near the petting zoo, with information on the building project, including videos, pictures and installation materials from the new structure. Children will be able to learn how zoos keep orangutans in appropriate environments, and go on to create their own animal-friendly enclosures. Visitors can also attend jungle school to find out how the Frankfurt Zoological Society’s landscape conservation programme prepares young orangutans for life in the rainforest. There’ll also be a child-friendly ropes course where younger climbers can put their skills to the test, and information about the threat to orangutans living in the wild, along with ways they can be protected.